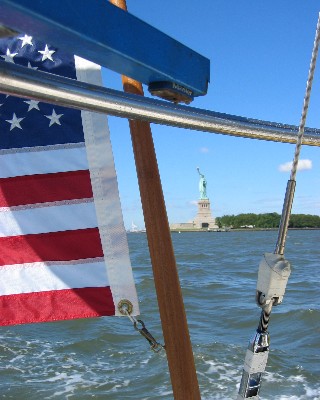 “The first condition of understanding a foreign country is to smell it.” – Rudyard Kipling

Moving west across the Atlantic Ocean, the prevailing westerlies blowing off North America bring you land smells a full day before the watch above calls “land ho!” We have been underway for over two months and the sounds and smells of the ship are completely routine and therefore unremarkable.  So too the bland and unaccented smell of ocean, salt spray and moisture. And so you smell New York City before you see it.

This must have been the case one hundred years ago as immigrants completing the last wave of the European diaspora arrived in New York harbor. Back then a crossing by steam took between 9 and 15 days. Most passengers made the passage berthed in steerage, a miserable experience. Yesterday’s storm has left many of our companions a bit green around the gills, regardless of the relatively luxurious modern accommodations. Even six days at sea has heightened our yearning for the land.

Tides and harbor traffic require an early arrival. We are up before the sun and on deck to face a brisk northwesterly wind, belying the calendar’s midsummer date. A near-full moon still hangs in the sky. And then we see it: the Verrazano Narrows spanned by an impressive multi-level bridge. Golden mist begins to rise, revealing dozens of cargo ships at anchor on the western edge of Upper New York Harbor. The city itself appears through the same mist. Our approach makes the skyscrapers appear to rise from the water, pushed upward by sheer willpower, ambition, energy and money. Home to the United Nations headquarters, New York City has been called “the capital of the world”. The city presents to us this morning a skyline worthy of that title.

Although we were among the first up, the decks are now filled with sightseers. Most lean out and strain forward, striving to be first to sight the Statue of Liberty. “There she is!” cries one excited teenage girl, and she’s right. The statue grows larger and more distinct against taller but less glamorous buildings along the Hudson River’s west bank. A brilliant yellow morning sun catches the gold-leafed torch, held aloft in the statue’s right hand. A wave of excitement, an eery feeling of shared history and pride sweeps over us. Several of our own ancestors must have experienced this very sight, shortly before immigration processing at Ellis Island. That facility is still there, a reminder of a dynamic time of change, hardship and opportunity. We hope the United States, as represented by this one iconic copper colossus, can remain a beacon of freedom for the people of the world.

Throughout the centuries there were men who took first steps, down new roads, armed with nothing but their own vision. ~ Ayn Rand

Thanks for sharing our story!
Tweet
Posted under Segment 3,Segment 4 and tagged with New York, USA
Comments (1)